The City of Lancaster retained Moule & Polyzoides - with a project team organized and managed by David Sargent and under the direction of Elizabeth Moule - to prepare a conceptual design for streetscape and facade improvements for the three-quarter mile segment of Lancaster Boulevard within the historic downtown, along with urban design and infill building concepts for adjoining blocks. Key design criteria for the Boulevard included creating a comfortable pedestrian environment with a distinctive sense of place, moderating the effects of the persistent westerly winds, and providing a high quality urban setting for shopping and a variety of community activities and special events.

The team proposed a series  of alternatives, and the City quickly chose the scheme that completely transforms the existing five-lane arterial by inserting a "ramblas" down the center - a hardscaped promenade with a double row of trees, occupied by angled parking most of the time and periodically by a public market and other special events. Fong Hart Schneider + Partners were a key design collaborator - preparing the final design and construction documents - and Swift & Associates provided invaluable advisement on traffic calming and geometric design.  Construction of the streetscape improvements was completed in late 2010.  The transformed and rebranded BLVD has been very well received by the community, with special holiday street fairs drawing 20,000 to 30,000 participants, a large number of new businesses opening along the street, and long-time businesses proposing new facade improvements to enhance the new downtown environment.

The project has been recognized by the U.S. Environmental Protection Agency with their 2012 Overall Achievement Award for Smarth Growth, and by the International Downtown Association with one of two 2013 Downtown Pinnacle Awards for Public Space. Sargent Town Planning has subsequently prepared a shared parking study for the district and is preparing new form-based transit-oriented zoning for adjoining neighborhoods and the Metrolink station area. 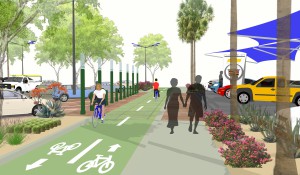 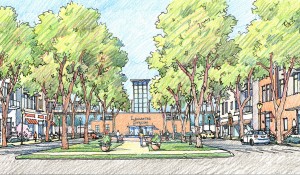