The City of Mountain View retained a team led by Raimi + Associates, and including Sargent Town Planning and Nelson Nygaard, to prepare a plan to guide the transformation of a 1970’s auto-oriented business park into a transit-oriented 21st century high tech employment district.  While low intensity business parks served the manufacturing-centered early days of  Silicon Valleys growth, the top challenge facing businesses in this North Bayshore district- including Google, Microsoft, Intuit, LinkedIn and others - is competing for top young software engineers, who increasingly gravitate to urban environments like San Francisco and New York.

The City set the ambitious goal of increasing development intensities in the district core by up to 10 times while reducing intensities adjacent to bayside habitats, and shifting transportation modes from auto- to transit-dominant.  The team worked closely with City staff, the key stakeholder corporations and City officials to identify practical strategies for linking a public shuttle and bike systems a to the commuter rail station in downtown Mountain View, threading pedestrian and bike green streets through existing mega-blocks as the framework for urban, mixed-use development patterns. The City Council adopted the Precise Plan in late 2014, with land use standards limited to non-residential uses for a range of policy reasons.

In early 2015 the City Council reconsidered the exclusion of residential uses and retained the same team - with the addition of Van Meter Williams Pollack and Seifel Consulting - to study the potential for integrating housing into the District.  Through collaboration with City staff and public workshops the team crafted a series of alternatives, and the City Council embraced an agressive program of us to 7,100 housing units to transform commute patterns and deliver a truly transit-oriented neighborhood lifestyle to North Bayshore.  That Precise Plan update is underway. 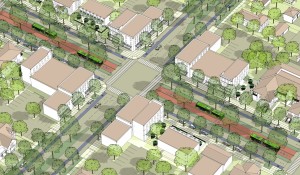 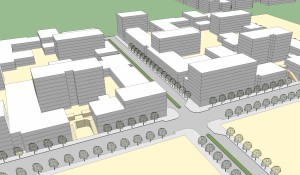 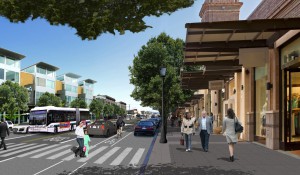 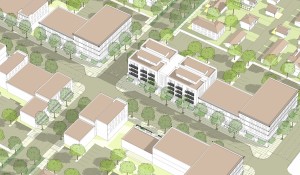