Located in south Monterey County, the farming town of King City has become an increasingly attractive location for new housing over the past two decades as housing to the north became less affordable. Immediately east of the historic downtown lies 500 acres of land owned by Smith Monterey, a family-owned land and farming company that acquired the property in the early 1960’s.

Smith Monterey retained David Sargent and his HDR Town Planning team to prepare a master plan for the entire 500 acres and a specific plan for the 100 acres already within the City limits, the Downtown Addition. Through a public charrette process the team prepared a master plan that organizes the property into four walkable neighborhoods beginning with the transit-oriented mixed-used Downtown Addition.

The Downtown Addition retains much of the original subdivision pattern and creates a square on the axis of Broadway, the town’s historic “main street”, with more natural geometry along the creek edge of the neighborhood. The Specific Plan includes a form-based development code that defines a range of town-scale building types and regionally appropriate architectural styles for the neighborhood. In 2014 STP assisted Smith Monterey in preparing a landscape master plan, gaining approval of a Vesting Tentative Map for the project, and designing new multi-family housing at the edge of Downtown.  STP also assisted the City’s rail engineering consultants in preparing  a plan for the new passenger station and for the First Street Corridor and Broadway street connections to the Downtown Addition. 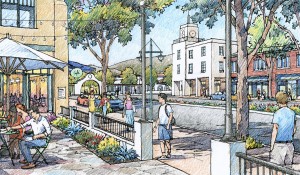 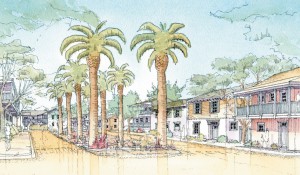