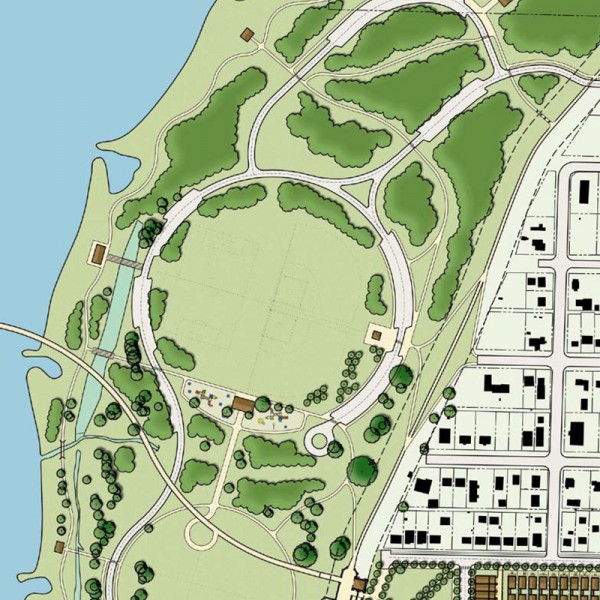 Playland Park is a redevelopment project on the east bank of the Missouri River in Council Bluffs, Iowa. The site - the former home of a well-known family fun park - is bounded by an existing neighborhood and two interstate highways, and is the Council Bluffs landing of the Bob Kerrey Pedestrian Bridge connecting to downtown Omaha across the river.

" src="/sites/all/modules/wysiwyg/plugins/break/images/spacer.gif" alt="<--break->">In January, 2007 a design charrette was held to establish a conceptual plan for the reuse of the site as neighborhood development. That collaborative planning process included the Playland Park Steering Committee and 13 design professionals in various disciplines, including David Sargent - then with HDR Town Planning - as senior urban designer. Over the course of five days, the team prepared and presented several development concepts and then - through an iterative process with the Steering Committee and other key stakeholders - refined the concepts to an agreed upon design and development proposal for Playland Park.

Following the design charrette, a Conceptual Master Plan document was prepared to position Playland Park as a sustainable neighborhood with diverse housing choices and flexible retail. The Plan also defines Playland Park as a gateway to the City of Council Bluffs and the State of Iowa, characterizing it as safe, clean, and attractive place, with a thriving urban economy in harmony with a healthy natural environment.