In 2017 the City of Oxnard retained Sargent Town Planning to prepare a form-based development code and design guidelines for is historic downtown.  The firm has contributed to a number of revitalization efforts for Oxnard’s downtown over the past 25 years, including preparing a Plaza Park Master Plan and Downtown District Master Plan in 1993-1995, and public improvement plans for Plaza Park and A Street in 1995-1996.  The firm also led the design team in a pro-bono community Charrette sponsored by the Congress for the New Urbanism in 2016, and the intent of the new Development Code is to formalize the vision and intent of the Charrette plan – and of the earlier Plaza Park and Downtown District Master Plans – in the form of very clear, graphical, implementation-oriented standards and guidelines, replacing the pre-existing more generic zoning regulations.

Through an extensive process of consultation and collaboration with City staff and downtown stakeholders, and several public workshops, the new standards were crafted, refined and completed.  They define three new zones to replace the single previous zone.  The Downtown Core Zone requires that buildings provide active, lively ground floor frontages and enables buildings up to 12 stories in height.   The Downtown General Zone is focused on generating an urban neighborhood environment, while the Downtown Edge Zone provides a transition from the larger-scale more urban Core and General areas to the historic neighborhoods to the west and north of the Downtown.  Unlike the previous zoning, the new Development Code provides guidelines for streetscape design and building frontages, to help ensure seamless coordination of public and private improvements, to generate an immersive pedestrian environment to help attract customer, businesses, investors and new residents to Downtown Oxnard. 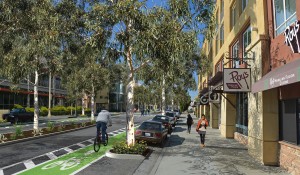