Located at the junction of the Petaluma River and rail transportation corridors leading from this agricultural region to the San Francisco Bay, Central Petaluma is home to both the historic downtown and several hundred acres of industrial land along the River. As truck transportation eclipsed the rail and river alternatives in recent decades, many of the industrial properties fell into disuse, and the City determined to reposition the area as mixed-use infill neighborhoods connecting to the downtown district to the River. The City retained the team of Crawford Multari & Clark, Fisher & Hall and Sargent Town Planning to lead a public engagement process and produce a vision-based specific plan for the brownfield industrial properties along the River. The plan that emerged defines a distinct character and scale for new development, weaving a neighborhood fabric composed of elements from the historic downtown and warehouse districts, with new streets and riverfront promenades, unified by a transportation and parking system that connects the new neighborhoods firmly to the Downtown. The design standards for public and private improvements were prepared in the form of a SmartCode, the first adopted by a municipality in California. Concurrently, the members of the planning team led the writing of a White Paper on Smart Growth in California, which was instrumental in the passage of State legislation explicitly empowering municipalities to adopt form-based development codes in lieu of conventional use-based zoning standards. 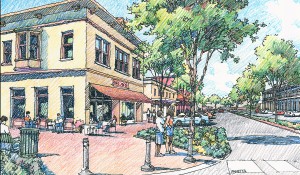